Here is a recent memorial mural that I was commissioned to paint by the friends of a young man that was murdered in Easton, Bristol. RIP Flames aka Andre Gayle.

This was the design that I put together based on the brief given to me by his close friends, they also said that his favourite colour was blue, so I used this to make it as bright and vibrant as possible. I wanted the mural to be a serious but warm celebration of him. For this reason I also decided to do the portrait in colour rather than greyscale, even though this was out of my comfort zone. I'm really glad that I did though, because although it was harder, I think greyscale would have put him in a different era. Where as colour makes him seem more present, which is what his friends and family wanted, to be able to stand there and feel him there with them. In the words of Andre's mother, "to live in the heart of those you leave behind is not to die". RIP Flames Just Kool Nuh.

There's now an article on this mural on Bristol 24/7 written by Yvonne Deeney. 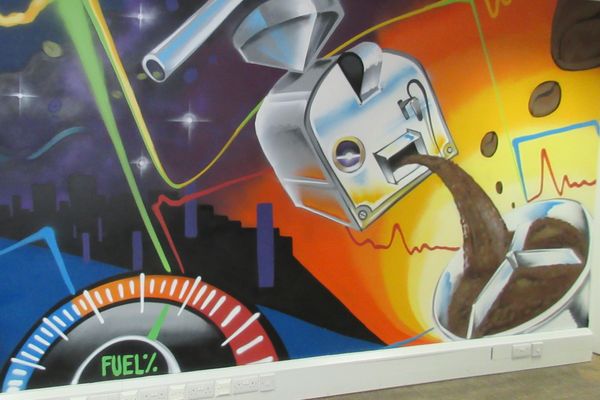 James from Clifton Coffee approached me as he wanted someone to design and paint a mural that mapped out the journey of their product, so we worked tightly together, as